Last night, I experimented.  No, I didn’t create my own recipe, but I decided to make a new recipe which I found on the Internet last week while I was searching for dinner ideas.  It was super simple, and I had everything on hand.  It was easy to make, and I really liked it.

What’s the problem?  Only 2 out of the 5 people eating dinner considered it edible.  Not good… And it makes me wonder about my own taste level.  Do I like really weird or disgusting things?  I don’t think so, but OF COURSE I won’t think what I like is disgusting.

So I’m sharing this recipe with a warning.  I liked it, one of my sons liked it (he ate 3 pork chops!), but my husband and 2 of my sons thought it was inedible.  As much as I enjoyed it, I am not likely to make this dish again.

Mix together equal parts of Balsamic vinegar and olive oil.  Tenderize pork chops, if using.  If using pork loin, you can cut up the loin into “chops” or marinade the entire loin.  Let marinade for 30 minutes.  Sprinkle salt and pepper on the chops, to taste.  Cook over medium-high heat until cooked through.

Here’s my photo step-by-step.  But, remember, I warned you that this dish is not loved by all.

I started with olive oil and balsamic vinegar, putting 1/3 cup of each in a small pyrex casserole pan.

I used a whisk to combine the oil and vinegar. 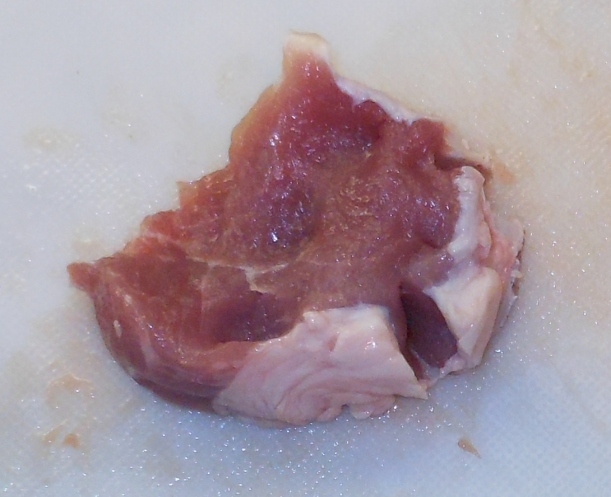 I cut up a pork loin into “chops,” then I cut the fat on the edge to prevent the “chop” from curling as it was cooked. 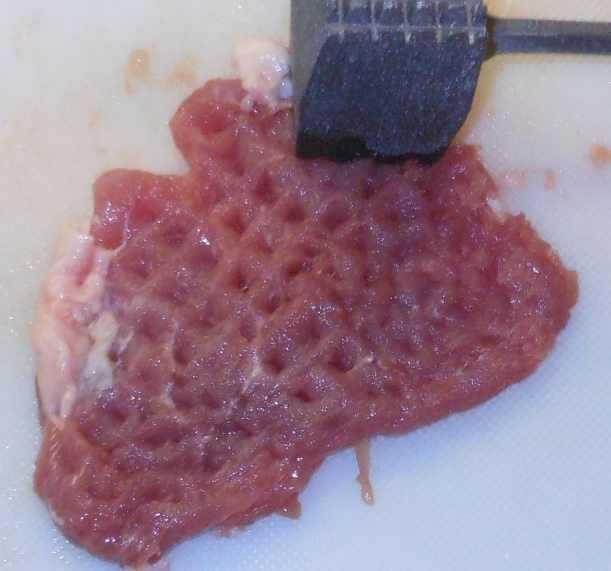 I tenderized each “chop” and placed it in the marinade.

After tenderizing the chops and placing them in the marinade, I let them sit for 30 minutes. Then I sprinkled salt and pepper on the chops and preheated a non-stick skillet with a little olive oil on medium-high heat. 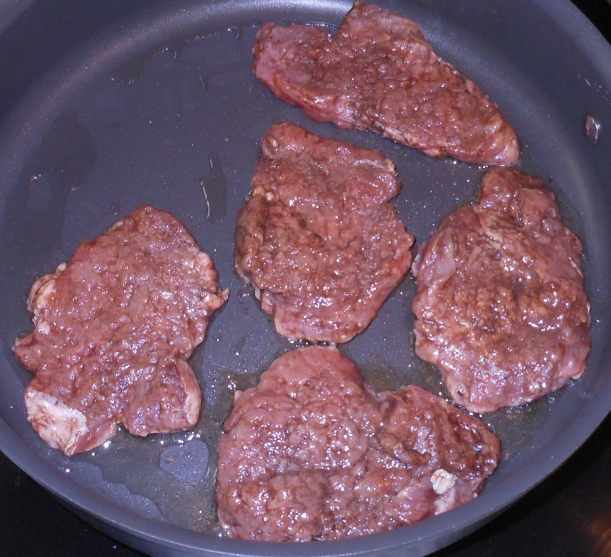 I placed the chops in the pan, ensuring there was enough space between them that they didn’t steam. I wanted a nice golden brown outside.

After a few minutes, I flipped the chops and let them cook on the other side until they were cooked through.

Then I served them with broccoli and jasmine rice. I thought it was yummy. My husband? Not so much.

There you have it.  Not quite an epic fail, but the best dinner experience for our family.  Oops!

Have you ever had a dinner like that?  Where some people loved dinner and other people hated it?

I’d love it if you’d share your experiences with me!

“How wrong?” you ask.  Well, I made a tiny mistake and my ganache was a tiny bit grainy.  Just a tad bit.  I decided to “fix” it, and I ended up with this.

That is not fixed!

For you to truly appreciate my experience, I’m going to show you in a photo step-by-step how my hubris caused my epic fail.

I started with some simple ingredients. I knew that by using chocolate chips (which are already tempered) it would be a touch trickier, but how hard could it be?

I set up a double boiler by putting a bowl over a pot of water on the stove. I made sure that there was a pretty tight fit so that the steam didn’t cause the chocolate to “seize.” I turned the heat on medium (which I now realize was too hot), and let the chocolate melt. 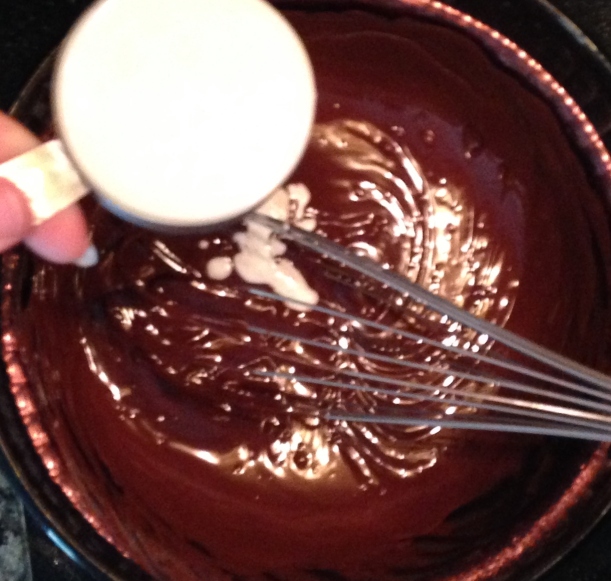 I added my cream (which I realize now I should have heated first and then added the chocolate.  I guess I should read all of the instructions before I begin, huh?)… 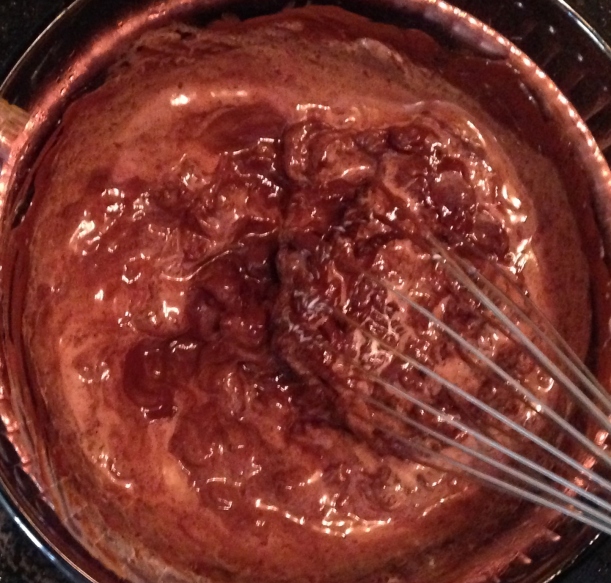 It didn’t incorporate as well as I thought it would.

I kept whisking and it finally came together, but it was a touch grainy. I consulted the internet about how I can “save” ganache once this happens.

Those tips didn’t work. In fact, it got worse!

What was I going to do?  I didn’t want to waste perfectly good chocolate!  Thankfully, I found one website which explained that once your chocolate ganache is gone, it’s gone.  BUT… you can use it in other things, like cookies.  So I whipped up a basic oatmeal cookie recipe and spread it in a pyrex pan, like this…

I spread the chocolate mess over the top.

I spread the remaining cookie dough over the top and let it mix a bit with the chocolate. Then I put it in a 350 degree F oven for 20 minutes.

After 20 minutes, they were browning, so I removed them from the oven. They probably could have gone for another few minutes, but I like my cookies chewy.

And here they are! They were delicious, too!

Have you ever had an epic fail or an epic save?  I’d love to hear about it!

So, I’m keepin’ it real.  Hopefully this fail will give you a good laugh and start your weekend off right.  Remember my Cafe Rio Black Bean post (see it here)?  I love those beans, and I make them every time I make my Cafe Rio Beef.  Sometimes, I’m running behind.  Okay, most of the time I’m behind schedule, so I whipped out my handy, dandy pressure cooker to cook my dried black beans.  I’d done it before, just never like this.  Look…

Here’s a picture my son took to capture this lovely memory. Please keep in mind that this picture does not even begin the capture the horror I was feeling in the moment. The liquid was seeping across the stove and the counters, pouring onto the floor, spewing all over me. As it seeped across the stove, the liquid was going into the area under the control knobs. It was not a fun moment.

Are you wondering how could I make such a huge mess?  Let me tell you.   I was going along my merry way making the beans.  My most favorite beans…

The timer went off, and I turned off the heat.  I don’t know what I was thinking, but rather than release some of the pressure from the pot or let it cool sufficiently, I decided to press the button the unlocks the pot.  If there’s still some built up pressure, it will release it and allow me to safely open the pan.  I learned that this is a VERY BAD THING to do!  I didn’t have any explosion or anything like that, but, as the pressure cooker was releasing the pressure from the pot, liquid came out.  Dark brown liquid.

All over my counters, the tile back splash, the stove, and the tile floor.  And all over me.  No burns or anything, but it made a big, BIG mess!  Actually the word “Big” does not even begin to describe it.  My son, Michael, insisted on taking a picture “for the blog.”  I was a little unhappy about it at the time (and I definitely was not planning to blog about it), but I think it is appropriate to capture the “not so fun” moments, so we can laugh about them later.

I used many towels to clean up this monstrosity!

A few minutes prior, I was begging the kids to help by grabbing some bath towels, while mopping up what I could with paper towels (I went through the rest of the roll, and it didn’t even make a dent.)  They were AWESOME and ran to the rescue!  We stopped the spread of the mess and cleaned it up.  (YEAH!  Thanks, boys!)

Then, we realized that the electric ignition (pilot light) for the stove (on every burner) was going off continually.  I googled the problem and read that this can happen when the ignition gets wet.  So I dried each one off thinking that would help.  No luck…  I tried turning on all the burners, thinking it would dry out faster if they were on.  No luck.  I read that sometimes it helps to turn off the breaker and then turn it back on.  No luck.  When John arrived home, he found a website that said you need to turn the breaker off for 24 hours, then turn it back on (after the stove has dried out), and that should fix the problem.  Nope!  STILL NO LUCK!

I was getting worried.  We have a cooktop range, and it is quite pricey to replace.  Last night, I was so stressed about it when I went to bed, that I prayed about it.  I woke up still stressed.  That’s saying something, because I am a “wing it” kind of gal, and most things don’t stress me out too much.  This was stressing me BIG TIME!

The following morning, one of the boys needed to heat something in the microwave, which is on the same breaker as the stove, so Michael went outside and flipped it on.  Lo and behold, I witnessed a miracle!  My stove was fixed!  No more incessant clicking!  No more guilt about ruining my cooktop!  I gave Michael a huge hug and called John with the good news.  We were (and are) so grateful to our Heavenly Father for helping us and blessing us with a functioning stove!

So, no long term damage done.  Life was good again.  At least until I broke my stove again the other day while making marmalade.  The water boiled over in the water bath canner and it was enough that the stove started “clicking” again.  Thankfully, it only went on for about 10 minutes, then it shut off.

Help me in my quest to “get real” and share some of your kitchen disasters.

We will all have a good laugh and feel so much better knowing we are not alone in our imperfection.